You are here: Home » Publications 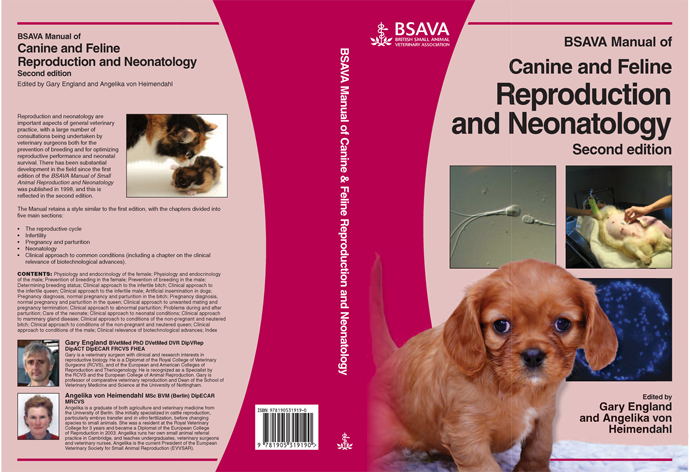 Our book is available on Amazon or BSAVA.

Progesterone is the most important hormone in female canine reproduction. It is easy to test for and can be used to look at ovulation, un-ovulatory seasons and silent heats. Progesterone is also the main cause for endometrial changes and resulting uterine infections and infertility. The wrong timing of mating is the most common cause of failure to conceive. We know that ovulation occurs at a specific Progesterone level and this can be used to pinpoint mating.

Progesterone cycle in the bitch
Dogs unlike other mammals produce Progesterone before and around the time of ovulation as well as for the next 60-65 days. Maximum concentrations are reached between 20-30d after the end of oestrus, whether the bitch is pregnant or not. From then on a gradual decline takes place with basal levels around 60-70 days after ovulation. The drop in progesterone will induce a rise in Prolactin which will stimulate milk production. In a pack animal situation most of the females will come into milk regardless of whether they have produced offspring themselves and will be able to help feeding.

How to test for Progesterone

There are basically two ways of testing progesterone: in house or at a laboratory.
In house: The tests are fairly easy to run, although accuracy is required and will give results within ½ hour. The standards are set at 3 ng/ml (beginning of rise) and ovulation at 8ng/ml and are visible through a colour change. The test sample is then compared to the colours of the standards. In another type of test the sample is compared to a printed colour chart. It is important to keep testing until ‘ovulation has occurred’ and not stop at ‘ovulation imminent’.
The laboratory tests are either RIAS or Chemiluminesence and just to make things more complicated are reported either in ng/ml or nmol/l   (1ng = 3 nmol). Laboratory tests are more accurate and because of the precise value of progesterone levels predictions can be made more easily. As a rule of thumb once the progesterone level starts to rise it doubles every two days.

To determine the days of mating two factors have to be considered: ovulation and maturation. Bitches will ovulate at around 6ng/ml (18nmol/l). After ovulation the oocytes have to mature for a further two days before they can be fertilised. Once mature they will be viable for another two days. Spermatozoa will take 6-12h to capacitate and reach the oviduct.

When using a laboratory the post office ‘Next day delivery’ service is very useful. One should also consider weekends and bank holidays. Normally given the predictable rise of  progesterone and the time available after ovulation this system works well.

Progesterone testing for some other conditions

Progesterone testing can be useful in a range of other reproductive conditions.
Split heats are quite common in young bitches, but also occur in around 5% of older animals. The first season is quite short and un-ovulatory, followed by a shorter than normal inter-oestrus period with a normal season. Progesterone rises only slightly and drops off again as ovulation hasn’t taken place. This can be tested any time in the next 40 days following the season.
Delayed puberty is suspected if a bitch has not shown any seasons by the time she is two years of age. To exclude a silent oestrus has taken place in the last two month a progesterone level would be the first test, before further investigations are attempted.
Silent oestrus can be a big problem as some animals show no or hardly any signs of swelling or discharge during their season. In order to breed form theses females testing has to start on the first day of any signs to make sure the fertile period is not missed.

Progesterone testing is a very useful, inexpensive and readily available tool in female canine reproduction. It can be used at different stages of the reproductive cycle and give information about the right time of mating and as well as some abnormalities.

There are certain conditions under which medical treatment of pyometra may be attempted:

In order to treat pyometra medically different groups of drugs can be used in conjunction or on their own.

Pyometra can be a life threatening condition and it is important to take veterinary advise. Once medical treatment has commenced it is vital to finish all treatments to the end even when the animal seems better after a short time.